Identity
At first glance, the natural and animal-oriented works of illustrator Jean Grosson might seem to be far removed from the world (urban, post-industrial, digital, etc.) of Nuits Sonores, an urban event that tend to be held at industrial heritage sites. 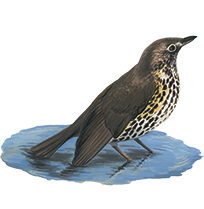 Still reeling from the repercussions of the Covid-19 crisis – first and foremost an environmental crisis, a disruption of our relationship with life – these special editions of Nuits Sonores and European Lab nonetheless find striking resonance in the drawings of the Lyon-based illustrator, whom we first discovered in the magazine Regain.

His natural works tell stories and exude the ‘narratives’ that form the editorial axis of these special editions: the ‘alternative narratives’ of Nuits Sonores.
His animal illustrations hark back to the very origins of storytelling: the first writing systems in Mesopotamia or Egypt used animal forms to create the characters that allowed the first texts to emerge. Beasts serve as the protagonists of our myths, tales and legends, and of the cartoons and comic books of our childhood.

Animal fables hold up a mirror to humankind, sometimes serving as a means to bypass religious
or political censorship. From Reynard the Fox to Wes Anderson’s Fantastic Mr. Fox, from the fables of La Fontaine to George Orwell’s Animal Farm, these stories fire our imagination and stimulate our minds.

More recently, philosophers such as Baptiste Morizot and Vinciane Despret have pointed out how wild animals and birds can inspire new ways of inhabiting our world, of establishing relationships with the earth, of rethinking diplomacy and of building society together, influenced by the concepts of performance, games, song, dancing parades, and so on.